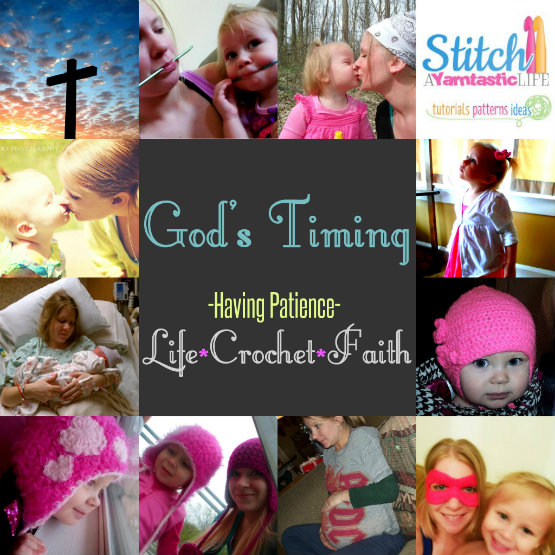 I believe God has perfect timing for everything.

I wanted to share my story of how God had put a child and crochet in my life at the perfect time.
I am always amazed at how things add up and line up in my life… things you never understand until years later.

Growing up, I had many people try to teach me how to crochet. The farthest I had ever reached with my hook was making a sloppy chain. In my early 20’s I became a Homemaker (cleaned for the elderly) I had one client who insisted I learn how to crochet instead of dusting behind her mountains of storage containers. (which I now know what she was hoarding ;))
I remember this beautiful old woman being so frustrated with me. It was almost like she could see the crochet light in my eyes and she was determined to help me reach my potential…. but I just couldn’t hold the yarn or hook correct… let alone actually crochet! I gave up. The idea of crocheting was such a tiny little thought in my brain. The thought of me actually picking up a hook and learning was obsolete.

During this time, I was also trying to have a baby. Month after month, year after year, I would get my hopes up. Wasting money on pregnancy tests were a monthy activity. After 8 years I gave up. For years I had cried out to God. I didn’t understand why I wasn’t *good enough* *woman enough* I came to the idea that God didn’t design me to have children. I believed this until Mothers Day 2010.

My world changed rapidly after that day.

I was blessed with a healthy daughter on 1-11-11. I then knew there was a reason it took me so many years to have her. In fact… there are many reasons. One year after having Ella, I picked up a crochet hook and a cheap skein of yarn and everything clicked in my brain. It was almost like this part of my brain was suddenly able to process a foreign language and all while my hands were able to hold a hook and yarn with ease. I was suddenly a natural.

I believe there is a reason it took me so long to have a child. I also believe there is a reason it took even longer to spark up the crochet wiring in my brain. God has a plan. And it is up to us to have faith and trust in him. Sometimes it is so hard to be patient… understanding…. but when he reveals the Big Picture, it will all make sense. We will know he had the best intentions for each of us the entire time…. and we wouldn’t want it any other way.

I can now look back at my life and know things would be so different if the timing would have been sooner. The world I know right now would not exist in my reality. Who knows what kind of mother I would have been if it had not taken 8 years to conceive.  The crochet community probably would have never been discovered by me. There would be no Stitch11. Most likely I would not be a stay at home mom…. I would be either waiting tables or in some dirty factory. My point is, God has a plan. Sometimes what feels like punishment to us is actually a blessing that we are not meant to understand just yet.  So have faith and remember to praise him through the storms…. it is those very storms that will help your gardens grow.

Receive my newest free crochet patterns by signing up for email alerts. 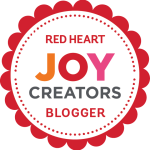